I was born in São Paulo in 1979 and now live on the island of Ilhabela, off the SE coast. Since childhood I’ve been very attracted to nature, collecting crabs and other critters at the beach, frogs in wetlands, surfing, snorkeling, walking the forest trails, etc. Soon I got a taste for sport fishing, and took it quite seriously for some years, even appearing on the cover of North American magazine “Wild on the Fly” in 2004. My fly fishing trips throughout Brazil (and abroad, I fished a lot in Florida too) eventually turned into a job, taking clients from all over the world to the Amazon to catch big Peacock Bass in remote waters. I worked with this for nearly 8 years, which was a very good experience in guiding tours.

The move to photography was gradual. At first, like all fisherman on the planet, I was mostly interested in making my fish look bigger. So I bought a Nikon D70 in March 2004 with a wide-angle lens. Then in 2006 me and my business partner  went on the craziest expedition of our lives. We were going to Serra do Aracá, a super remote tepui mountain in the Amazon near the border with Venezuela. It took us 7 days just to get there, slowly navigating with a large canoe through narrowing river channels, hiking through virgin rainforest and climbing slippery rocks. Meals were whatever we managed to hunt or fish. We didn’t quite get to where we wanted – at the base of the largest waterfall in Brazil, discovered by the Army only in the mid 90?s with survey flights and never before reached from underneath – but we did walk through areas that no “white men” had ever stepped before. During that trip I photographed a rare bird for the first time ever, the Caura Antbird. This photo won the largest Brazilian bird photography contest in the category “best ornithological record” and a pretty good amount of money as prize, enough for me to buy my first pro tele, a 300mm f/2.8. Later I would win the same contest again, but this time on the “best photo” category with a photo of two macaws playing in mid-air. 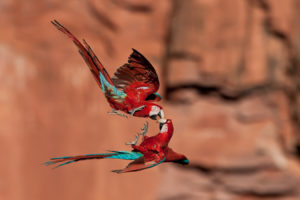 All of a sudden I found myself photographing or watching birds more often then I was fishing. I began “discovering” my local birds and the incredible diversity of species in the Atlantic Rainforest and never looked back. I started guiding photo tours in 2007 to the Pantanal, a place I know intimately since childhood. I was among the pioneers to start modern Jaguar photo tours in that area, as well as in Patagonia for Pumas. Today my tours are specially focused on wild cats, and I am proud to say that I was the first photo tour guide offering tours to dependably photograph all of the 3 largest cats in the Americas: Jaguar, Puma and Ocelot. My goal now is to include some of the other smaller species as well.

My photos have been published in several magazines and books worldwide, including National Geographic. I have published my first book in 2013, showing the most well preserved aspects of the Atlantic Rainforest. More info on it, and sample photos, can be found at www.kaaete.com.br.

Larissa was born in Cuiabá, Mato Grosso, in 1989 and was raised in the Pantanal. As a teenager she was trained as a guide in one of the most famous lodges of the Transpantaneira, where she learned guiding skills and different languages: english, french, dutch and spanish. Guiding groups of photographers arose in her the will to photograph as well, and for a few years she has been working only with photography groups, from all over the world.

As a fully licensed guide, she has an extensive experience, leading groups all over Brazil and South America for many different companies. Because now photography is a passion of her, she got even more interested in wildlife and specially Jaguars. Larissa has a keen sense for locating these cats and frequently finds amazing sightings. She loves to explore remote areas and while doing that she recently located two different families in the very same spot, all together: one with 2 cubs and the another one with 3! This incredible sigthing, and others, generates interest from national media, where she often makes interviews and such.

Today Larissa, as my partner, lives together with me in Ilhabela. We are also partners in our tour company, organizing and guiding groups, separate or together.